Multi Threaded Access To ensure that the gravity（重力） of the problems introduced by concurrently using the same cache lines on different processors is understood, we will look here at some more performance graphs for the same program we used before.

This time, though, more than one thread is running at the same time.

What is measured is the fastest runtime of any of the threads.

This means the time for a complete run when all threads are done is even higher.

The machine used has four processors; the tests use up to four threads. 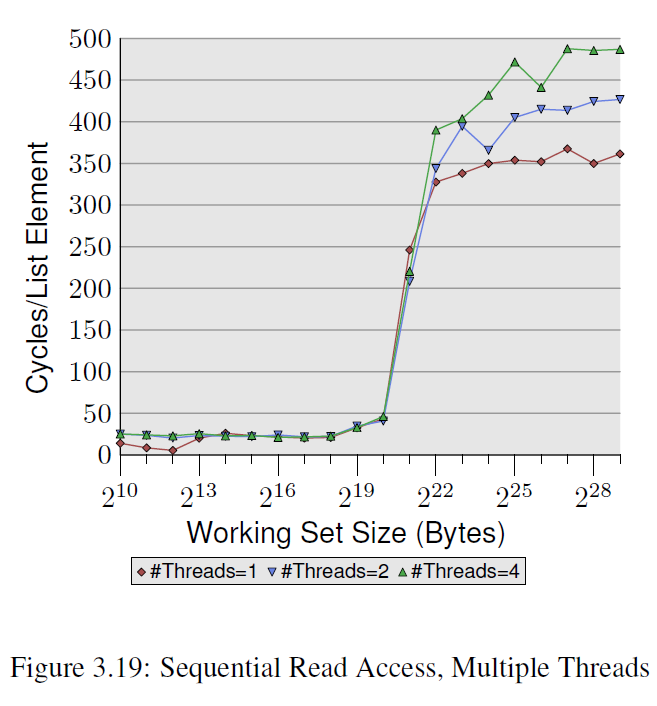 For the curve for one thread we can expect a curve similar to Figure 3.11.

The measurements are for a different machine so the actual numbers vary.

The important part in this figure is of course the behavior when running multiple threads.

Note that no memory is modified and no attempts（尝试） are made to keep the threads in sync when walking the linked list.

Even though no RFO messages are necessary and all the cache lines can be shared, we see up to an 18% performance decrease for the fastest thread when two threads are used and up to 34% when four threads are used.

Since no cache lines have to be transported between the processors this slowdown is solely caused by the one or both of the two bottlenecks:

Once the working set size is larger than the L3 cache in this machine all three threads will be prefetching new list elements.

Even with two threads the available bandwidth is not sufficient（不足以） to scale linearly（线性扩展） (i.e., have no penalty（惩罚） from running multiple threads).

When we modify memory things get even uglier.

Figure 3.20 shows the results for the sequential Increment test. 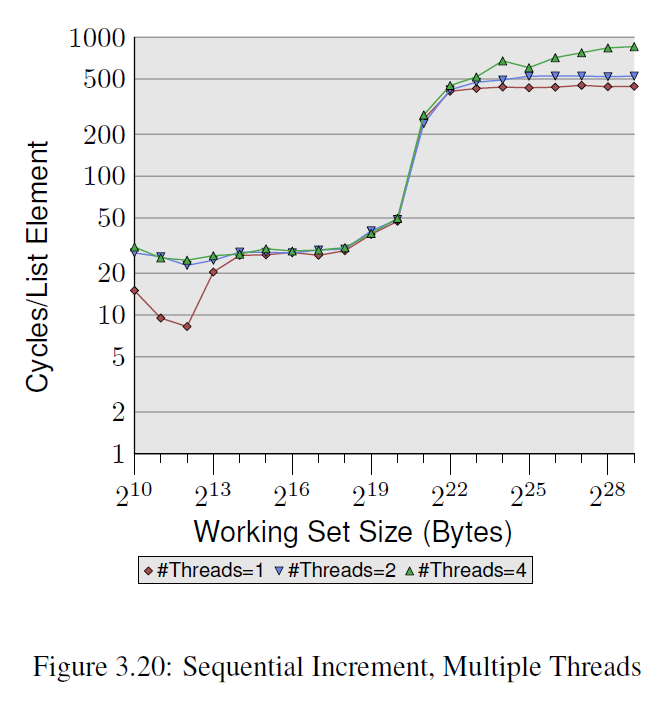 This graph is using a logarithmic（对数的） scale for the Y axis.

So, do not be fooled by the apparently small differences.

We still have about a 18% penalty（罚款） for running two threads and now an amazing 93% penalty for running four threads.

This means the prefetch traffic together with the write-back traffic is pretty much saturating（饱和） the bus when four threads are used.

We use the logarithmic scale to show the results for the L1d range.

What can be seen is that, as soon as more than one thread is running, the L1d is basically ineffective.

The single-thread access times exceed 20 cycles only when the L1d is not sufficient to hold the working set.

When multiple threads are running, those access times are hit immediately, even with the smallest working set sizes.

One aspect of the problem is not shown here.

It is hard to measure with this specific test program.

Even though the test modifies memory and we therefore must expect RFO messages we do not see higher costs for the L2 range when more than one thread is used.

The program would have to use a large amount of memory and all threads must access the same memory in parallel.

This is hard to achieve without a lot of synchronization which would then dominate（只配） the execution time.

Finally in Figure 3.21 we have the numbers for the Addnextlast test with random access of memory. 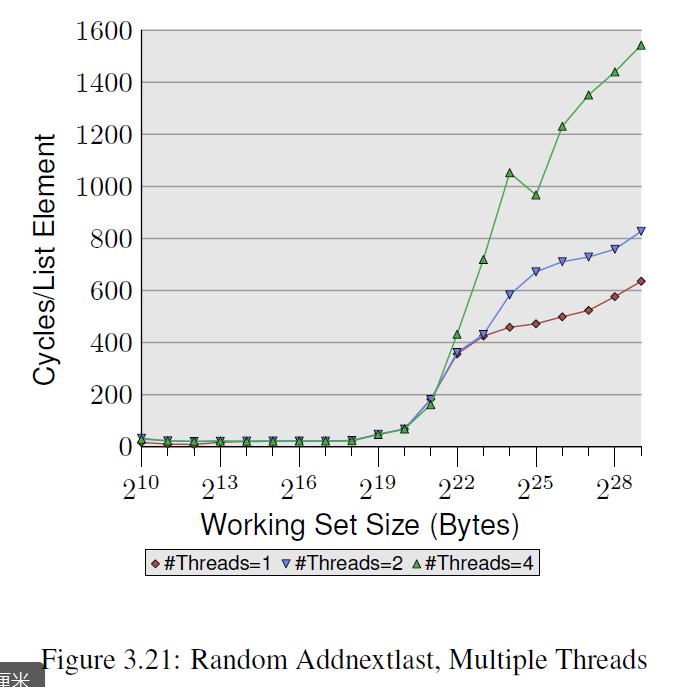 This figure is provided mainly to show the appallingly（令人吃惊） high numbers.

It now takes around 1,500 cycles to process a single list element in the extreme（极端） case.

The use of more threads is even more questionable.

We can summarize the efficiency of multiple thread use in a table.

The table shows the efficiency for the multi-thread run with the largest working set size in the three figures on page 28.

The number shows the best possible speed-up the test program incurs for the largest working set size by using two or four threads.

For two threads the theoretical（理论上） limits for the speed-up are 2 and, for four threads, 4.

The numbers for two threads are not that bad.

But for four threads the numbers for the last test show that it is almost not worth it to scale beyond two threads.

The additional benefit is minuscule（微不足道）.

We can see this more easily if we represent（代表） the data in Figure 3.21 a bit differently.

The curves in Figure 3.22 show the speed-up factors, i.e., relative performance compared to the code executed by a single thread. 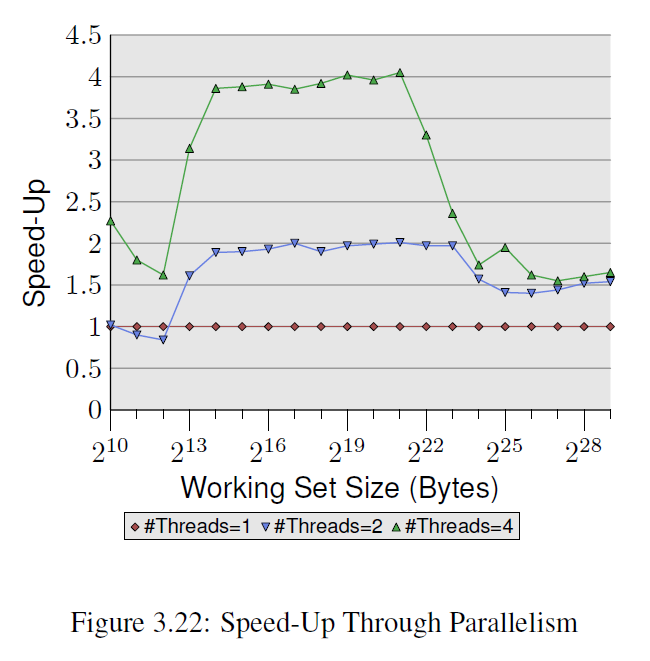 We have to ignore the smallest sizes, the measurements are not accurate（准确） enough.

For the range of the L2 and L3 cache we can see that we indeed achieve almost linear acceleration（确实实现了几乎线性加速）.

We almost reach factors of 2 and 4 respectively（分别）.

But as soon as the L3 cache is not sufficient to hold the working set the numbers crash（紧急）.

They crash to the point that the speed-up of two and four threads is identical（相同） (see the fourth column in Table 3.3).

This is one of the reasons why one can hardly find motherboard with sockets for more than four CPUs all using the same memory controller.

Machines with more processors have to be built differently (see section 5).

These numbers are not universal.

In some cases even working sets which fit into the last level cache will not allow linear speed-ups.

In fact, this is the norm since threads are usually not as decoupled as is the case in this test program.

On the other hand it is possible to work with large working sets and still take advantage of more than two threads.

Doing this requires thought, though.

We will talk about some approaches in section 6.