When many threads are used, and they do not cause cache contention by using the same cache lines on different cores, there still are potential（潜在的） problems.

Each processor has a maximum bandwidth to the memory which is shared by all cores and hyper-threads on that processor.

Depending on the machine architecture (e.g., the one in Figure 2.1), multiple processors might share the same bus to memory or the Northbridge.

The processor cores themselves run at frequencies where, at full speed, even in perfect conditions, the connection to the memory cannot fulfill all load and store requests without waiting.

Now, further divide the available bandwidth by the number of cores, hyper-threads, and processors sharing a connection to the Northbridge and suddenly parallelism becomes a big problem.

Efficient programs may be limited in their performance by the available memory bandwidth.

Figure 3.32 shows that increasing the FSB speed of a processor can help a lot.

This is why, with growing numbers of cores on a processor, we will also see an increase in the FSB speed.

Still, this will never be enough if the program uses large working sets and it is sufficiently optimized.

Programmers have to be prepared to recognize problems due to limited bandwidth.

The performance measurement counters of modern processors allow the observation（意见） of FSB contention.

On Core 2 processors the NUS_BNR_DRV event counts the number of cycles a core has to wait because the bus is not ready.

This indicates（指示） that the bus is highly used and loads from or stores to main memory take even longer than usual.

The Core 2 processors support more events which can count specific bus actions like RFOs or the general FSB utilization.

The latter might come in handy when investigating the possibility of scalability of an application during development.

If the bus utilization（采用） rate is already close to 1.0 then the scalability opportunities are minimal.

If a bandwidth problem is recognized（承认）, there are several things which can be done.

They are sometimes contradictory so some experimentation might be necessary.

One solution is to buy faster computers, if there are some available.

Getting more FSB speed, faster RAM modules, and possibly memory local to the processor, can and probably will–help.

It can cost a lot, though.

If the program in question is only needed on one (or a few machines) the one-time expense for the hardware might cost less than reworking the program.

In general, though, it is better to work on the program.

After optimizing the program code itself to avoid cache misses, the only option left to achieve better bandwidth utilization is to place the threads better on the available cores.

By default, the scheduler in the kernel will assign a thread to a processor according to its own policy.

Moving a thread from one core to another is avoided when possible.

The scheduler does not really know anything about the workload, though.

It can gather information from cache misses etc but this is not much help in many situations.

One situation which can cause big memory bus usage is when two threads are scheduled on different processors (or cores in different cache domains) and they use the same data set.

Figure 6.13 shows such a situation.

Core 1 and 3 access the same data (indicated by the same color for the access indicator and the memory area).

But the threads are scheduled on different processors.

This means each data set has to be read twice from memory.

This situation can be handled better. 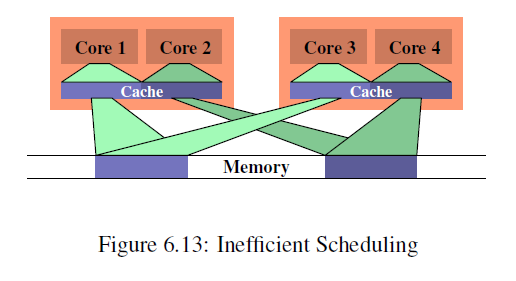 In Figure 6.14 we see how it should ideally（理想的） look like.

Now the total cache size in use is reduced since now core 1 and 2 and core 3 and 4 work on the same data.

The data sets have to be read from memory only once. 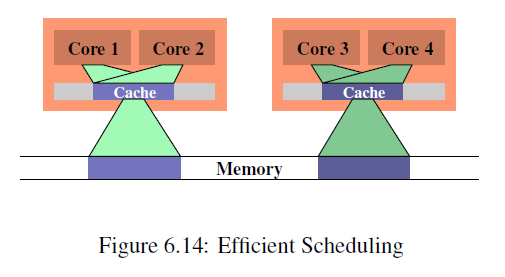 This is a simple example but, by extension, it applies to many situations.

As mentioned before, the scheduler in the kernel has no insight into the use of data, so the programmer has to ensure that scheduling is done efficiently.

There are not many kernel interfaces available to communicate this requirement.

In fact, there is only one: defining thread affinity（亲和力）.

Thread affinity means assigning a thread to one or more cores.

The scheduler will then choose among those cores (only) when deciding where to run the thread.

Even if other cores are idle they will not be considered.

If too many threads exclusively run on a set of cores the remaining cores might mostly be idle and there is nothing one can do except change the affinity.

By default threads can run on any core.

There are a number of interfaces to query and change the affinity of a thread:

These two interfaces are meant to be used for singlethreaded code.

The pid argument specifies which process’s affinity should be changed or determined.

The caller obviously needs appropriate privileges to do this.

The second and third parameter specify the bitmask for the cores.

The first function requires the bitmask to be filled in so that it can set the affinity.

The second fills in the bitmask with the scheduling information of the selected thread.

The interfaces are declared in <sched.h>.

The cpu_set_t type is also defined in that header, along with a number of macros to manipulate（操纵） and use objects of this type.

CPU_SETSIZE specifies how many CPUs can be represented in the data structure.

To initialize an object CPU_ZERO should be used;

the other two macros should be used to select or deselect individual cores.

CPU_ISSET tests whether a specific processor is part of the set.

CPU_COUNT returns the number of cores selected in the set.

The cpu_set_t type provide a reasonable default value for the upper limit on the number of CPUs.

Over time it certainly will prove too small; at that point the type will be adjusted.

This means programs always have to keep the size in mind.

The above convenience macros implicitly handle the size according to the definition of cpu_set_t.

If more dynamic size handling is needed an extended set of macros should be used:

These interfaces take an additional parameter with the size.

To be able to allocate dynamically sized CPU sets three macros are provided:

The return value of the CPU_ALLOC_SIZE macro is the number of bytes which have to be allocated for a cpu_set_t structure which can handle count CPUs.

To allocate such a block the CPU_ALLOC macro can be used.

The memory allocated this way must be freed with a call to CPU_FREE.

These macros will likely use malloc and free behind the scenes but this does not necessarily have to remain this way.

Finally, a number of operations on CPU set objects are defined:

These two sets of four macros can check two sets for equality and perform logical AND, OR, and XOR operations on sets.

These operations come in handy when using some of the libNUMA functions (see Appendix D).

A process can determine on which processor it is currently running using the sched_getcpu interface:

The result is the index of the CPU in the CPU set.

Due to the nature of scheduling this number cannot always be 100% correct.

The thread might have been moved to a different CPU between the time the result was returned and when the thread returns to userlevel.

Programs always have to take this possibility of inaccuracy into account.

More important is, in any case, the set of CPUs the thread is allowed to run on.

This set can be retrieved using sched_getaffinity.

The set is inherited by child threads and processes.

Threads cannot rely on the set to be stable over the lifetime.

The affinity mask can be set from the outside (see the pid parameter in the prototypes above);

Linux also supports CPU hot-plugging which means CPUs can vanish from the system–and, therefore, also from the affinity（亲和力） CPU set.

In multi-threaded programs, the individual threads officially have no process ID as defined by POSIX and, therefore, the two functions above cannot be used.

The first two interfaces are basically equivalent to the two we have already seen, except that they take a thread handle in the first parameter instead of a process ID.

This allows addressing individual threads in a process.

It also means that these interfaces cannot be used from another process, they are strictly for intra-process use.

The third and fourth interfaces use a thread attribute.

These attributes are used when creating a new thread.

By setting the attribute, a thread can be scheduled from the start on a specific set of CPUs.

Selecting the target processors this early–instead of after the thread already started–can be of advantage on many different levels, including (and especially) memory allocation (see NUMA in section 6.5).

Speaking of NUMA, the affinity interfaces play a big role in NUMA programming, too.

We will come back to that case shortly.

So far, we have talked about the case where the working set of two threads overlaps（重叠） such that having both threads on the same core makes sense.

The opposite can be true, too.

If two threads work on separate data sets, having them scheduled on the same core can be a problem.

Both threads fight for the same cache, thereby reducing each others effective use of the cache.

Second, both data sets have to be loaded into the same cache;

in effect this increases the amount of data that has to be loaded and, therefore, the available bandwidth is cut in half.

The solution in this case is to set the affinity of the threads so that they cannot be scheduled on the same core.

This is the opposite from the previous situation, so it is important to understand the situation one tries to optimize before making any changes.

Optimizing for cache sharing to optimize bandwidth is in reality an aspect of NUMA programming which is covered in the next section.

One only has to extend the notion of “memory” to the caches.

This will become ever more important once the number of levels of cache increases.

For this reason, a solution to multi-core scheduling is available in the NUMA support library.

See the code samples in Appendix D for ways to determine the affinity masks without hardcoding system details or diving into the depth of the /sys filesystem.